skip to main | skip to sidebar

Some odds and ends

Is it really October already? Here are some odds and ends
Had a trip up the coast for our anniversary, cooked some Alaska salmon, had some fantastic wine, and took a drive up the 1 to Monterey. 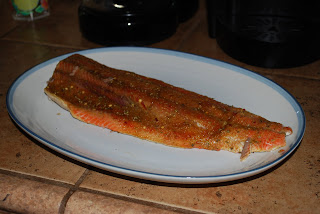 Finally got around to making Chinese soy sauce chicken, including an adventure to the 99 Ranch Market soy sauce aisle. Bonus, tiny bok choy for $.99 a bag! 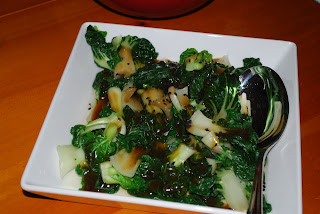 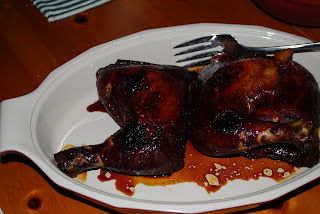 Birthday dinner was a great big veal chop and some heirloom tomatoes -- YUM! 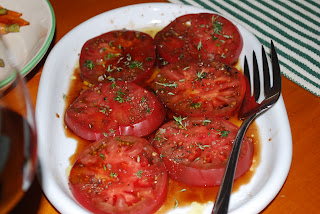 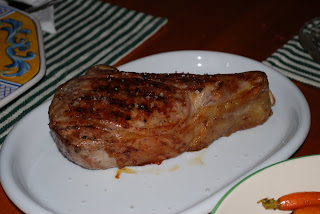 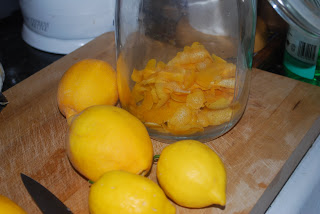 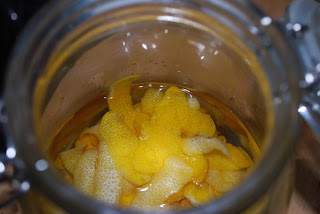 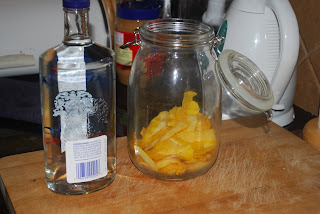 I am such a bad blogger...
1 - I get into a rut where I make the same things over and over ... or go to Juan Pollo around the corner
2 - We go to the coast, eat fresh fish and/or steak, and really who wants to hear about our adventures at the beach?
3 - When I do cook something new -- this week a "quick chicken masala" from Food & Wine that I adapted to be even quicker -- I forget to take a single photo (but I served pale chicken and onions, along with white rice, on a white plate....)
Well... for #3, here's the recipe:
Posted by Erika at 9:04 PM No comments:

So...
I've actually cooked twice this weekend, new things from cookbooks since this is the time of year that I put away the braising type books and get out the lighter cooking.
Yesterday was a classic from Marcella Hazan, a pasta in sausage cream sauce. It's a lot like Mario Batali's "sausage and weeds" (in fact I use the same pasta), but no tomato paste. I really liked it, it had a nice mild flavor but was still creamy and coated the pasta well.
Today, we went around the world to Rick Bayless from Mexican Everyday. I hit the Smart & Final "Extra" down the street for some tomatillos, a chile, tortillas, and some cotija cheese. I made the spinach & mushroom enchiladas with tomatillo cream sauce. I left out the optional chicken, but followed the recipe pretty closely. I do have this comment ... the recipe calls for queso fresco, but lists feta as an alternate. Queso fresco here is more like mozzarella in texture, so I bought cotija. Maybe it's a regional difference? Who knows. I used sour cream too, I find the Mexican crema a bit too runny for my taste.
Why no pictures? Well, the pasta wasn't really all that photogenic, a pale sauce on pale pasta. The enchiladas really needed to be put together, served & eaten really quickly. And, I was running late, or I would have added some artistic photos of tomatillos half husked or something using depth of field. Besides, surely someone else has made those enchiladas so there is probably a great photo out there in the interwebs somewhere.
Posted by Erika at 8:28 PM No comments:

As an homage to Thursday Night Smackdown's "Awesome Shit that I Want Monday"... I present the following.... 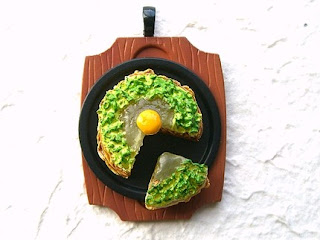 Don't you need a pendant that looks like okonomiyaki?? I do... or rings that look like other Japanese foodstuffs. Check it out on Etsy
Posted by Erika at 8:48 PM No comments:

A quiet weekend in Los Osos was well deserved after the 25 lbs of pork shoulder sold at the baseball tournament last weekend!
We rested, we ate Mo's BBQ for lunch, steaks & local bay scallops for dinner, and homemade chorizo & egg burritos for breakfast.

As we were packing up, one of the Forever Stoked guys that live next door brought these beauties, wild chanterelle mushrooms from their secret spot somewhere in the hills: 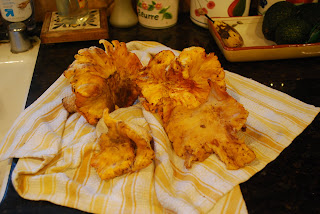 Yes, they are that big, here's one next to my chef's knife (not a paring knife) for scale: 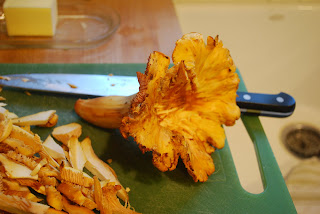 Simply sauteed with butter, shallots, and a bit of thyme & seasoning, splashed with vermouth & cream: Tossed with papardalle, they were just about perfect with a Loring Wine Company Pinot (08 Rancho Ontiveros to be exact). 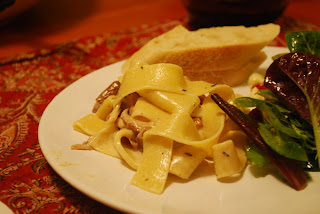 Spectacular. Makes California worth it... mostly.

Back to the Kitchen...

A week with the creeping crud head cold, our house saw a lot of soup. Monday and Tuesday were soup, and Wednesday was pasta (sausage and "weeds" from Mario Batali) which is a big favorite. Thursday I was just way too beat, so it was pizza.

Friday I made it through the afternoon without cold medicine and without using a box of tissue, so we celebrated with something new from Pepin's More Fast Food My Way, crispy chicken thighs and mushroom sauce.

The thighs are cooked skin down with a tight lid in no fat until the skin is nice and crispy, these could have gone a few more minutes. Then some onion, garlic & mushrooms are sauteed in the chicken fat (drain all but about 2 tablespoons), with a bit of wine (vermouth in this case) until reduced to a nice sauce. With a nice salad, made a perfect Friday night dinner. The evening was rounded out with some popcorn and The Great Muppet Caper - love Charles Grodin's socks! 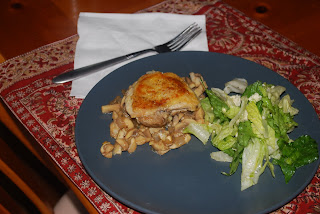 Saturday was errand day, with grocery store visits in between torrential downpours (its an El Nino, confirmed officially today). I had promised the Rabbit for a while that we would see the Percy Jackson movie, capped off by Bob's Big Boy (ok patty melt actually, though the meat was kind of dry).

Today, the sun came out, and I felt like spending some time in the kitchen. I made breakfast (eggs and chicken sausage), then put together some no-knead bread, and baked it. 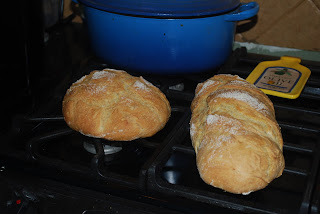 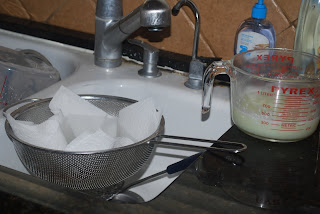 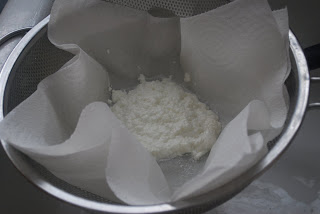 It actually turned out pretty good, with a drizzle of nice olive oil, a bit of salt, pepper & thyme. We had a little post-game snack. 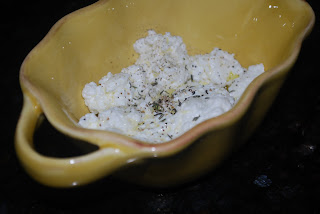 Now, I have a pot roast going in the oven. Life is good.

Erika
I love to cook. I just realized this in the last few years, although my dad is a chef so you think I would have learned from him. But I didn't, and I wish I had learned more (too busy sulking through my teenage years I guess). Welcome to my blog about food, and maybe a few other fun things thrown it for good measure!